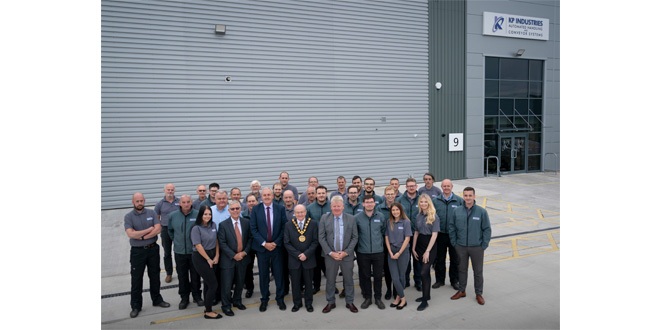 “We’re working with some of the biggest names in the automotive, aerospace and nuclear sectors so it’s vital our facilities reflect our ambition to be a world class business in the industry,” he said. “We took the space at Logic primarily because of its location next to the M62 and its impressive appearance. When we bring clients to the facility it’s important that our facilities create the right image for the business. “At the moment we’re employing 34 people and turning over £7m however this site is geared up for 44 people and we’re targeting £10m turnover by 2022.”

The company designs, manufacturers and integrates bespoke automated handling equipment and conveyor systems for customers in a wide range of industries, in the UK and overseas “We’re a business that moves things from A to B,” he said. “We move everything from car bumpers, through to full cars, lorry cabs, aircraft wings and even nuclear waste containers. “We’ve worked with the likes of BMW, Bentley Motors, British Nuclear Fuels, Jaguar Land Rover and Bombardier and if you walked around their production lines you’d see KP Industries’ equipment in all parts of their processes.”

Cornell founded the business in 2004, using the initials of his wife Kerris and his own name to come up with KP Industries.

In its humble beginnings the manufacturer was originally based in a 1,000 sq ft facility in Canalside Industrial Estate, Rochdale. In 2014 they brought a long-standing customer FM Nicholson, which specialises in the integration of materials handling solutions. In 2016 combined turnover of the two businesses was £3m but grew to £7m in 2019 and is predicted to grow to £10m by 2022. “Because of our new facilities we’re looking to take on larger projects for our existing clients now that they’ve seen what we’re capable of,” said Cornell. “We’re also looking to win new clients in existing and new sectors. Cornell added: “Rochdale Council and Rochdale Development Agency assisted us find our first facility in 2004 and helped us find these units at Logic. They’ve also helped us find apprentices. We’ve always been based in the town and there’s a lot of positivity around Rochdale especially manufacturing. Some of the technology we have is second to none.”

Logic at Kingsway Business Park has been developed through a joint venture partnership between Wilson Bowden, Homes England, Rochdale Borough Council and the RDA.