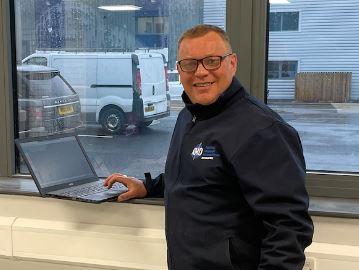 The boss of a fast-growing start-up predicts turnover at its Rochdale base will double to £6m following their move into new premises.

Ryan Hopley only launched Repair Maintenance & Overhaul (RMO) in 2018 but it already boasts four offices and an annual turnover of £6m, with Rochdale accounting for half. The business is an electrical mechanical and instrumentation distributor and supplies multiple sectors including oil and gas, construction, rail, water, utilities and food production.

It grew by a third in 2020 despite the pandemic and is about to move into a 6,488 sq ft unit at Rochdale Council’s Logic development at Kingsway Business Park.

Mr Hopley said: “We’re really excited to be moving to Logic. We were literally bursting at the seams at our old site in Harriett Street. We had no room but didn’t want to leave Rochdale. We worked with Rochdale Development Agency and as soon as we saw the unit at Logic we realised that was where we wanted to be. It’s a great location next to the M62.

“We currently employ eight people in Rochdale but that will increase to 12 after the fit-out of our new unit at Logic. Rochdale accounts for half our turnover and we think that will double to £6m with the move. I’m a Milnrow lad so setting up a business in Rochdale was the natural choice.”

Mr Hopley only decided to launch his own business after a shock cancer diagnosis in 2015. He recounted: “I was working for a large corporate electrical distributor and developed a bulge in my stomach that I wrongly assumed was a hernia. I had a scan and it turned out to be kidney cancer. I’ve been given the five-year all clear and I’m living life to the full.

“Going through something like that changes the way you approach life. I’d always wanted to set up a business so after my cancer battle I decided to do it and jumped in feet first.”

Mr Hopley was 46 when he launched his first RMO site in Harriett Street, Rochdale, and followed it up with branch openings in Liverpool in 2019, Grimsby in 2020 and the acquisition of a Teeside-based business.

The managing director said he had another personal reason for moving to Logic.

“Before Logic was built my Mum used to keep horses on the same land as the new unit is on,” he said. “It feels like fate coming here. The unit is currently been fitted out but when it’s finished we’re going to put a horse shoe on the boardroom wall for good luck.

“I should have launched the business years ago but I feel as though we’re catching up for lost time.

“Rochdale is a great place to base a business because of the people and the excellent connectivity and we can’t wait for the move to Logic in week commencing March 22 when we look forward to helping customers old and new with their requirements.”