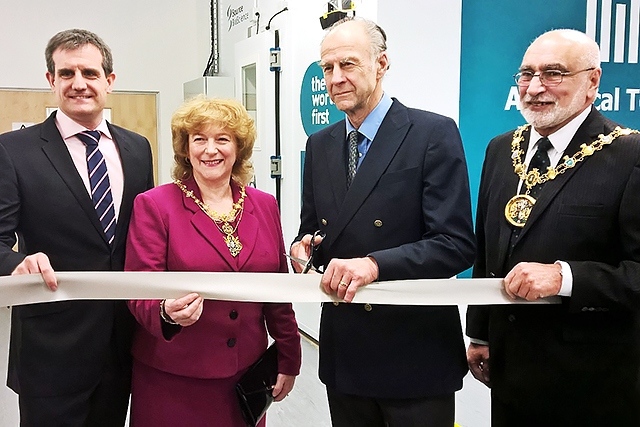 The world-famous explorer, who was the first man to visit both the North and South poles by surface travel met with senior council and business figures at Source BioScience, Kingsway Business Park, for the grand opening of the chamber, which is to be used for scientific research, pharmaceutical storage and analytical chemistry. The chamber, which requires a special space-like suit for a human being to enter, is the only one of its kind in the world, and has to be monitored on a 24/7 basis.

Dr Nick Ash, CEO of Source BioScience, said: “Rochdale is very important to us, not just as one of the first industrialised towns, but it is the place where we deliver our flagship facility.” Referring to Sir Ranulph, Dr Ash added: “As someone who can survive the extreme cold in unimaginable ways on both the North and South poles I can’t think of anyone better to be here today. Perhaps for him it would be a walk in the park.” The Mayor and Mayoress, Surinder and Cecile Biant, Rochdale Borough Council Leader Councillor Richard Farnell and Council CEO Steve Rumbelow were among the audience who asked Sir Ranulph to sign their copy of his book, ‘To the Ends of the Earth’.

Addressing the audience, Sir Ranulph said: “Motivation in life is the sum total of everything that has happened to you, and my motivation was when I was travelling to the remote parts of the world. You can’t change character, but you can teach skills, and that’s what we had to do.” Mayor Surinder Biant said: “I was very impressed with Source BioScience, it is another great success story for Kingsway Business Park, and it is fantastic for the economy of Rochdale. “We are currently working hard to build to local economy and we are proud that places like this exist within the borough. “Sir Ranulph Fiennes was absolutely mesmerising in his speech, he talked for well over an hour and everyone was hooked. It was a real pleasure to meet him and it was great to get a signed copy of his book. It was great to have him come and open the chamber.”